This course is based on the USA Today and Amazon bestseller, The Conversion Code. After taking this course you will increase your online lead generation and lead conversion efforts tremendously. There are 3 primary sections to the course: Section One: Capture More Leads, Section Two: Create More Appointments, Section Three: Close More Sales. There are also coaching MP3s, sales scripts and bonus content in the course like an hour keynote speech with slides, an amazing eBook and a digital poster you can print and hang in your office. 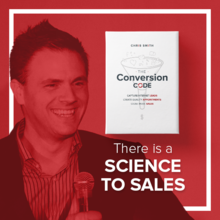 In less than four years, he used the blueprint in his book, The Conversion Code, to grow Curaytor to over $12 million in annual, recurring revenue. His work has been featured in AdWeek, Forbes, Inc. and by many other publications.

Prior, Chris worked for two billionaires, a near billion dollar publicly traded company and a startup that was acquired for $108 million.

His first book, Peoplework, raised over $73,000 on Kickstarter, has more than 50,000 copies in circulation and received endorsements from the CEO of Zappos and Gary Vaynerchuk, who wrote the foreword.

Chris is a highly sought after keynote speaker and is a perennial on the most influential people in the real estate industry lists.

Tweet
We suggest moving this party over to a full size window.
You'll enjoy it way more.
Close
Go Fullscreen